146 is the New Ranking of Grigor Dimitrov 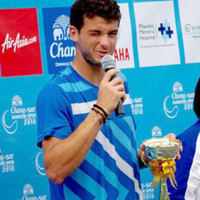 With the points from the title of the last week's ATP Challenger in Bangkok, Thailand (award ceremony on the photo) Grigor moved 44 positions ahead to his new best ever ranking of 146.

The gap between Grigor and the following Bulgarian players becomes even bigger - Dimitar Kutrovsky is at 580, Tihomir Grozdanov - 584. Todor Enev and Valentin Dimov lose more positions and go to 725 and 854 respectively.

The only change in Top 10 is the return of Andy Roddick (USA) to No 10. The top is occupied by Rafael Nadal (Spain), Novak Djokovoc (Serbia) and Roger Federer (Switzerland).