Dimitrov Reached Another Challenger Final after Defeating Seed 2 in Bangkok 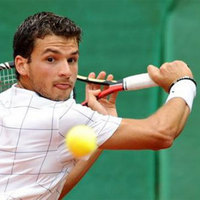 Grigor Dimitrov defeated Seed 2 Go Soeda of Japan in three sets 6-3 6-7(3) 6-0 and reached the final of the 35'000 USD ATP Challenger Chang-Sat Bangkok Open in Thailand. This was 9th consecutive win of Grigor. The young Bulgarian will try to win a second Challenger title after thetriumphin Geneva,Switzerlandlast month. For reaching the final Dimitrov gained 48 ranking points which will help to reach his best ever ranking next week.

In the battle for the title Grigor Dimitrov will play Konstantin Kravchuk from Russia, current ATP rank 141, 25 years old. The Russian succeded to reach two Challenger finals earlier this year in Astana,Kazakhstanand Penza, Russia, and and lost both of them.

#3: Hello Grigor, I saw you in Este ITF Italy and for me you have the shots to be the future number one in tennis.
Strengthens physical and tactics and you will be at the end of the year inside the Top 100.
Good Luck you and your coach MR.Mcnamara.

#0: Well done Grigor! Ninth win in a row! I think this should have bumped up your confidence. Go for another title !
Hope you can make the Top-100 by the end of the season !