Dimitrov Slides Down To ATP Rank 360 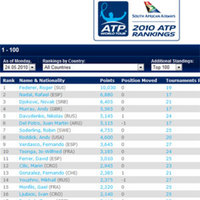 As Grigor Dimitrov could not defend his last year's points from the ATP Challenger in Nottingham he loses 22 positions and goes to position 360. In the doubles he reached a new best position - 296.

The Bulgarians after Dimitrov in the ranking are: Tihomir Grozdanov - moves 113 positions upwards to 645, Todor Enev is at 711, Dimitar Kutrovsky is at 799.

Rafael Nadal (Spain) is the new No 1 after winning the title at Roland Garros. Roger Federer (Swizterland) goes to No 2. Novak Djokovic (Serbia), Andy Murray (Great Britain), Nikolay Davydenko (Russia) keep there positions from 3 to 5. The finalist of Roland Garros the Swede Robin Soderling moves to No 6. Andy Roddick (USA) moves one position ahead to No 7. Juan Martin del Potro (Argentina) loses 2 positions and goes to No 8. Top 10 ends with Fernando Verdasco (Spain) and Jo-Wilfried Tsonga (France) who keep their previous positions. The Roland Garros semi-finalist Jurgen Meltzer (Austria) gains 11 positions and moves to No 16 and the Czech Tomas Berdych goes to No 13.