Grigor Dimitrov Battled Past Marcos Baghdatis. Plays Murray in the Fourth Round 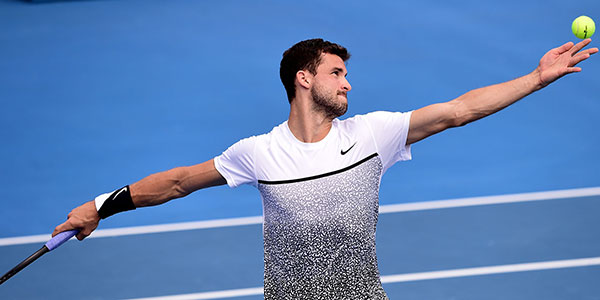 "It was a tough game for me," said Dimitrov. "[I] didn't really feel comfortable on the court… Matches like that really defines I think who you are and how you want to be remembered.I think this is how you go forward. Today was one of those days for me, that I didn't really feel good on the court, wasn't really comfortable with my game, but I found a way to fight through it [from] two sets to one down. To me that says a lot, gives me a lot of confidence.”

In the fourth round Dimitrov will have the tough task to beat sixth seed Andy Murray. In the 6 matches so far Murray leads 4 to 2. Last October Murray beat Dimitrov at Paris Masters but in the other two matches in 2014 Grigor won in the quarterfinals of Wimbledon and in the semifinals in Acapulco.

#1: Hey. Can't believe he lost in the 4th Round to Andy Murray. He should really start focusing on the mental side of the game so he can learn to change strategies more often during a game. Grigor shouldve won if he frequently changed strategies. Good lyour Grigor for the next tournament.

#0: There can be no doubt that the serve is one of the most important parts of any tennis game, if not the most important part. It has and will continue to define players and points.
A look at statistics reveals interesting conclusions.
Overall, the trend shows that first serve percentage only slightly decreases as one moves from the top-ranked players to the bottom. First serve percentage simply isn’t a huge factor in determining rank.
The percentage of second serve points won is considerably more important, according to the data. Though by no means a perfect correlation, the trend line across the top 100 men’s singles players reveals about a six percent difference between the top players and those at the bottom.
The top three players, Djokovic, Rafael Nadal and Roger Federer each win at least 56 percent of their second serve points.

By the numbers, however, the most important serving statistic is first serve points won. The difference between the top players and the bottom is nearly 10 percent. The top ten players average a first serve winning percentage of about 75 percent.
improve your first-serve percentage and its effectiveness.

Develop that big first serve and use it when you need it. Don't be satisfied with a high percentage on big points.
Develop your weapon so you can hit your way out of trouble.
The first serve is usually the shot that shapes the rest of the point, so get in as high a percentage as you can without taking the offensive punch out of the shot.