Grigor Dimitrov Reached the Quarterfinals in Bangkok. Will play ex No 20 Tursunov 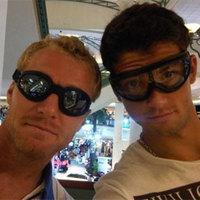 Grigor Dimitrov won instraightsets the second round match of Chang-Sat Bangkok Open against the Russian Evgeny Kirillov 6-4 6-3. This way Dimitrov gained 15 ATP ranking which will help him to reach new best ever ranking.

In the quarterfinal match Dimitrov will have far more tough goal as he will play the ex No 20 Dmitry Tursunov of Russia (photo: Dmitry Tursunov and Grigor Dimitrov in Bangkok). Tursunov is currently No 487 and has no major successes this year but reached AT Rank 20 back in October 2006. The Russian won 6 titles in ATP tournaments the last one being the grass tournament in Eastbourne in 2009.

#1: lolzzzz this duo pic make me remind about the other one which Grigor was showing his abs with Dmitry ^^

#0: Jajaja... What's this picture with these bizarre glasses about?
Come on Grigor!! You can beat Tursunov. Dmitry is a great player (one of my favourites by the way) but he's made no remarkable results in almost 12 months. Dmitry's ranking shows how tough tennis is. 12 months ago Tursunov was ranked 38, now he's dropped to 487!!
Come on Grigor! Can't wait to see you back at ATP higher level tournaments !!