Second Final for Grigor This Year 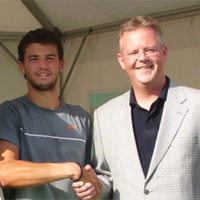 Grigor Dimitrov reached second final this year, at Apano Cup in Dortmund, 15K USD ITF Futures. In the semi final Grigor defeated Seed No 6 David Goffin of Belgium with a score of 6-1 7-6(3). Dimitrov easily won the first set 6-1 and reached 4-2 in the second set, then the Belgian succeed to recover for 4-4. The match had to be decided by tie-break which was taken by Dimitrov 7-3.

In the final on Sunday Dimitrov will play the German Jan-Lennard Struff, 20 years-old. The representative of the host country has current ATP rank of 485. The match starts at 1 pm CET.

Grigor Dimitrov skips the qualifications of the ATP Challenger in Segovia, Spain and will miss to defend 25 ATP points from last year's edition of the tournament. Anyway he gained 20 ATP ranking points for reaching the final in Dortmund and would earn 35 if he gains the title tomorrow.