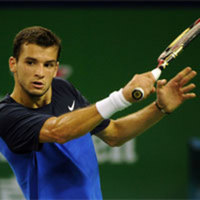 Grigor Dimitrov left the Shanghai Masters after losing in the second round to ex No 1 Andy Roddick. The American who is currently No 15 advanced to the third round after 2 sets win 7-6(3) 7-5. So far Grigor played against Top 20 players 12 times and he still could not reach to a win. Back in 2009 in Rotterdam Dimitrov won against then No 23 the Czech Tomas Berdych.

With the 45 points that Grigor won in Shanghai would move one or two places upwards in the next week's ranking.

Grigor Dimitrov will start in the main draw of the €600K ATP 250 tournament in Stockholm in the company of Soderling, Monfils, Wawrinka, Del Potro, Chela, Mayer, Raonic, Dodig during the week of 17 October.

#2: As #1rumenh said, you can beat them and that's why they play nervously and make mistakes! Just try to get an advantage from those mistakes. So many times you had like 10 break points and you realize 1-2! It is really annoying for you and for us the fans that are watching :( PLEASE STAY FOCUSED AND PLAY YOUR GAME! If you do this top 10 will be a piece of cake ;)

#1: Aside from fair play, there are shameful tactics, which includes disrupting your concentration with some gamesmanship, making questionable line calls, etc.
that is a frustrating experience. Learn from it. Next time, you will have more poise.

My best advice to cope with these annoying disturbances is to focus all of your energy on how to win the next point.
Clear your mind of all the other negative thoughts, although this is not easy, and simply focus on… how to win the next point.
In the end, your opponent can try to distract you, cheat you, annoy you, but if you can control your thoughts,
then you will still be in the driver’s seat out there.

Some people seem to be born with confidence,
while others need to develop it (like any other specific skill).

Rely on the rituals you develop in practice. For example, take a deep breath, bounce the ball twice etc. before serving.
Do it every time that you serve. Be sure to slow down when you are feeling anxious. Most players tend to rush when they are nervous,
so do the opposite.

All this is easier written than done.
Good luck, and be assured that every player gets nervous out on the court.

#0: Roddick should be happy to survive this match. You are improving, Grigor. Slowly but you do, man. They know that you can beat them and play nervously. Your time is coming. Enjoy it more, dude! We'd love you to win more.