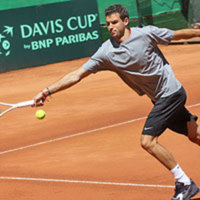 Grigor Dimitrov had no problems against the non-ranked Racket No 1 of Albania Flavio Dece and won the match 6-1 6-1. Earlier today Dimitar Kuzmanov was also convincing in the match against Rei Pelushi with giving only one game to the Albanian 6-1 6-0. The Bulgarian pair of the experienced Todor Enev and Petar Trandafilov for whom this was a Davis Cup debut smashed the Albanians Flavio Dece/Rei Pelushi 6-0 6-2. So on day 1 Bulgaria defeated Albania 3-0.

On Friday the Bulgarian team will play Georgia with 2 players that are listed in ATP ranking - George Tsivadze, No 1257, and Alexndre Metreveli, No 1491.