Dimitrov Beat Andujar at the Start of Shanghai Open. Plays Djokovic in the Second Round 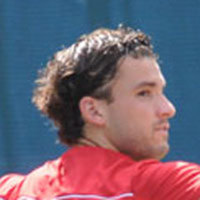 Grigor Dimitrov advanced to the second round of the ATP Masters in Shanghai, China, after defeating Pablo Andujar of Spain 7-5 6-3. This was 3rd march between them and Dimitrov leads to the world No 41 Andujar 2-1: in 2010 Dimitrov won the final of the ATP Challenger in Geneva, Switzerland and last year in Nice, France, Andujar reached the victory after retiring of Dimitrov.

After this first round win Dimitrov gained 23'000 USD of the prize money and 45 ranking points which will cover the 45 points won last year at the same tournament.

In the second round on Wednesday Dimitrov will play world No 2 Novak Djokovic of Serbia. Until now Dimitrov had no chance to be at the court against Djokovic. From 15 matches against Top 10 players so far Dimitrov won 2 - both against Tomas Berdych and lost the other 13: 3 times to Tsonga, Tipsarevic and Ferrer, 2 times to Monaco and once to Murray and Nadal. The match against Djokovic is expected to be on televised court, Bulgarian fans will be able to watch it on TV+/Film+ on Bulsatcom or Al Jazeera 2 HD on Blizoo.