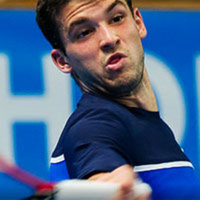 Grigor Dimitrov reached his fourth ATP World Tour quarter-final in his career so far when he ousted Seed 4Juan Ignacio Chelaof Argentine6-2 5-7 6-1. He succeeded to convert 6 of 10 break-points in the match. Year to date win-loss balance of Grigor improved to 18-24. This was his third win over Top 30 player from total of 19 attempts so far - over Berdych (No 23), Baghdatis (No 25) and now Chela (No 28).

"I was struggling a bit at the beginning of the set and definitely [Chela] was raising his game and he made great shots here and there," said Dimitrov. "Got a bit confused, got into his game, and I lost focused a little bit in the second set."

45 ranking points were added to the balance of Dimitrov and he won 15'730 EUR of the prize for reaching the quarter-finals.

Dimitrov will play Seed 6 and rank 29 Milos Raonic of Canada in the match of the youngsters.

#3: Hey Grigor, where are you? Please post something for us, your dire fans. We know you need a rest after 31 events but when you will be back. Talk to us, Dude.

#2: Big servers like Raonic test your game in a unique fashion. You can’t afford to let any point slip away.

Playing against a dominant server is one of the most trying and intimidating challenges. While your opponent piles up the aces and easy points, you’re scratching and clawing to stay in the game. No set comes easy against a big bopper, but overcoming a massive serve is an exciting accomplishment.

Returning the serve is the first step. Merely from a confidence standpoint, getting the ball back over the net keeps your hopes alive. You want to make your opponent hit one extra shot, even if he smashes it for an easy winner.

There are specific ways to prepare for a big serve:

Stand anywhere from 5 to 12 feet behind the baseline, and pay attention to the server’s toss.
Look for any clue — like his toss — as to where he might place the ball or what type of spin he might hit with.
Pay attention to how far down he crouches or how high he jumps. Some players crouch down really low on their first serve, and then barely bend their knees on their second. This is a huge clue for how they are going to strike the ball.

You might find tendencies in his stroke and predict the direction or pace of his serve. Also, move your feet towards the baseline as your opponent tosses the ball, and split step as he makes contact. You cut off the angle of the ball by moving towards the server, which makes it easier to get a racquet on the ball.

Rather than taking a full swing, simply chip or punch the ball back over the net. Let the server supply the power of your shot, rather than trying to smash a winner. If you can, try to keep your opponent on the move by angling the ball to one of the corners.

Most big servers like to keep the match moving — they want to end the point in four swings and put the pressure on your shoulders. Playing against a big server is not only a physical battle, but it also tests your mental fortitude. Whiffing on serves makes you feel as though the strings on your racquet are disappearing, one by one. Don’t let your confidence waver. Instead, try to dictate the pace of the points.

Don’t let your opponent fall into a comfort zone and determine the rhythm of your game.

Tennis is a heady game. When the ball is bouncing in your favor, it’s easy to play with assurance and swagger. But when an opponent is firing over serves that aren’t exactly ideal for strong returns, some tennis players lose their self-belief very quickly, and their game follows their confidence down the drain. Play with poise, and don’t feed into your opponent’s style of play.

Playing against an opponent that racks up aces teaches you the importance of holding serve. You aren’t going to have many break opportunities, so you need to serve with consistency and confidence. Keep the following suggestions in mind:

Play mistake-free tennis: Minimizing unforced errors is the easiest way to hold serve. Don’t try to outhit the big hitter. Keep the ball in play, and search for holes in your opponents’ game.
Make your serves: Try taking some pace off of your serve, and avoid double faults by any means necessary. You can’t afford to hand your opponent free points. Get the ball over the net and run him around the court.
Keep your opponent guessing: Don’t let your opponent get comfortable at any point in the match. Vary your first serves from time to time: Hit a topspin serve down the “T,” and then come back with a slice serve out wide.

In all likelihood, you’ll only have one or two break opportunities per set. If you can’t hold serve, you can’t expect to win the match. You have to take advantage of your few break chances and play mistake-free tennis during your own service games. Aces aren’t the only way to hold serve — exploit any holes in your opponent’s game, and keep the ball over the net consistently.

#1: I hope to play beautiful tennis and make a difference