Dimitrov Defeated Sela in Nice, plays Gilles Simon in the Second Round 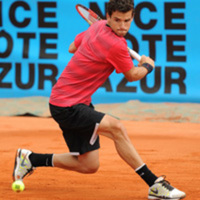 Grigor Dimitrov advanced to the second round of the main draw of the ATP 250 tournament in Nice, France. In the first round Dimitrov took revenge of Dudi Sela of Israel of the loss in 2010 and defeated him 7-5 6-1. Dimitrov started the match in a perfect way and reached a lead of 3-0, then had the chances to close the set at 5-3 but Sela succeeded to break. But with score of 6-5 when Sela was serving Dimitrov won the second of 3 set-balls. Then Dimitrov won convincingly the second set 6-1.

For his first round win gained 32 ranking points and 6885 EUR of the prize money. The gained points will help Grigor to be at least at No 90 in the next week's ranking.

On Wednesday Dimitrov will play Seed 2 and rank 12 Gilles Simon of France. Simon has two tough wins over the Bulgarian - both in 2009 in Marseille and Queen's.