Dimitrov Entered the Main Draw of Australian Open, Plays Golubev in the First Round 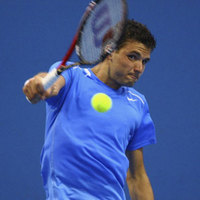 After losing the first set in a tie-break Grigor Dimitrov took two sets to arrive the victory and this way to enter the main draw of Australian Open. Dimitrov defeated the 202-cm high Dutch player Thomas Schoorel with score of 6-7(5) 6-3 6-1.

Grigor Dimitrov won 35 ATP ranking points and moved to his best ever rank of 105 according to the ranking of 17 January 2011.

In the first round the draw matched Dimitrov to play against Andrey Golubev of Kazakhstan, No 38 in the new ranking. The match is 3rd in a row at Court No 10 on Monday. Golubev won the only previous match against Dimitrov 6-4 6-0 in Barcelona back in 2008. The Kazakh player's best rank is 33 as he won 1 ATP tournament title in his career - 1'000'000 USD, Hambourg in 2010.

#0: yes!!
I'm very interesting to see your progression throuth this important tournament. For me the game is not just win or loss but playing and yours is so beautiful. good lock for australia and all the saison 2011...