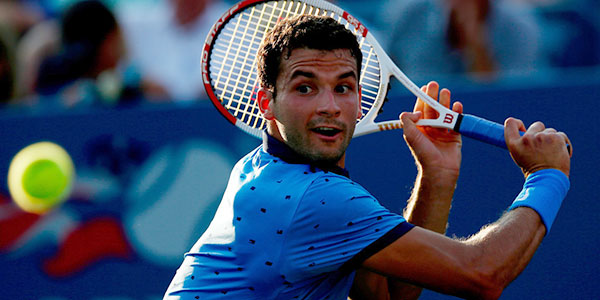 Grigor Dimitrov started the 3rd round match of US Open against David Goffin of Belgium with poor scores in most of the aspects of the play - 31% first service hit and 2-11 winners to unforced errors ratio. All this lead to 0-6 score in the first set. In the second set Dimitrov cleaned up his game and succeeded to take the set. Grigor started the third set with 4-0 lead but a series of errors allowed David Goffin to recover and reach 4-4. Dimitrov made a solid return and broke the service game of Goffin to reach advantage of 1 set. Then Dimitrov needed 20 minutes to take the 4th set after quickly reaching 4-0 lead. So within 2 hours 21 minutes Grigor Dimitrov beat David Goffin 0-6 6-3 6-4 6-1.

In the 4th round Grigor Dimitrov will play Gael Monfils of France, world No 24, No 20 seeded at US Open. On Sunday Monfils defeated his countryman Richard Guasquet in 3 sets. On Tuesday Dimitrov will seek to avenge a first round US Open defeat to Monfils in 2011. In April this year Dimitrov played Monfils in the semi-finals of Bucharest when the Frenchnman retired because of injury and Dimitrov won the tournament title ultimately.