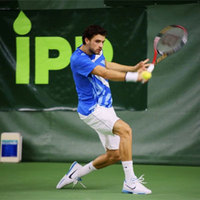 In another 3 set match in the quarterfinals of the Helsinki Challenger Grigor Dimitrov defeated the German Julian Reister 7-6(5) 3-6 6-1 and advanced to the semifinals. In the first set Dimitrov was losing 1-4 and then 2-5 but he took the next 3 games to 5-5. The set was decided in a tie-break - Reister was leading 5-3 but Dimitrov won the next 4 points to win the set. The second set started also with a lead of Reister 4-1 and then 5-3 and succeeded to break and win the set 6-3. In the third set Grigor quickly reached 4-0, Rester succeed to take only the next game and the Bulgarian closed the set 6-1.

With the points won so far Dimitrov would be ranked at about No 105 and this wouldguaranteea place in the main draw for the first Grand Slamtournamentof 2011 - Australian Open.

In the semifinal match on Saturday Dimitrov will play the 20-years-old Lithuanian Richard Berankis, ex Junior No 1.

#0: Hi Grigor , now is good for you goals.
Bye and see you Roma and Wimbledon.