Expectedly Grigor Dimitrov is at New Best Ever Position of 66 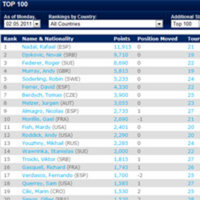 With the points gained at BMW Open in Munich last week Grigor Dimitrov reached new best position No 66 improving 3 positions compared to last week's ranking. In the doubles ranking Dimitrov moved to No 461 which is 145 positions higher than last week.

In Top 10 it is Nicolas Almagro of Spain that goes ahead of Gael Monfis of France to No 9. And there are no changes in the positions from 1 to 8 as Rafael Nadal of Spain in No 1 ahead of Noval Djokovoc of Serbia and Roger Federer of Swizterland followed by Andy Murray (Great Britain), Robin Soderling (Sweden), David Ferer (Spain), Tomas Berdych (Czech Republic), Jurgen Meltzer (Austria).