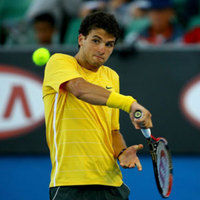 The decision of ATP was to fine Grigor Dimitrov with 10'000 USD and deprive him of right to play at ATP tournaments during 3 weeks. This was caused by the incident of Grigor Dimitrov with the umpire after the match with Richard Berankis at the ATP Challenger in Helsinki. This was the reason for the withdrawal of the Bulgarian from the ATP Tour in Chennai, India. Luckily Australian Open is organized by ITF and not by ATP and Dimitrov was allowed to participate. The next participation of Dimitrov would be the qualifications of the ABN Amro ATP Tour 500 in Rotterdam, the Netherlands from 5 February.

#0: Let's move on. Dimitrov is better than his Ranking - that's what one of the American ESPN3 TV comentators said on Australian Open about Grogor. He and we gotta move on.
Rotterdam - Start great there - better than last time, you can do it!