Grigor Dimitrov Advanced to the Third Round at Roland Garros. Plays Djokovic 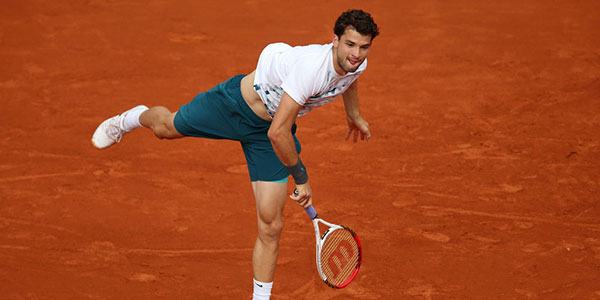 Grigor Dimitrov became the first Bulgarian tennis player who has reached the third round of a Grand Slam tournament. In the second round of Roland Garros Dimitrov defeated in straight sets the wild card entrant Lucas Pouille 6-1 7-6(4) 6-1.

In the third round Grigor Dimitrov will play No 1 Novak Djokovic. Earlier this month Dimitrov made the headlines of all media after beating Djokovic at Madrid Masters.

For reaching the third round DImitrov gained 60'000 EUR of the prize money and added 90 points which for now keep him at No 28.

On Friday Grigor Dimitrov and his partner Frederik Nielsen of Denmark play Jeremy Chardy (France) and Lukasz Kubot (Poland) in the first round of the doubles tournament.

#0: I know it will be difficult for Grigor to defeat Djokovic to the best of three sets, but I hope he will. Nothing against Novak, but Grigor is my favorite ! I am sure many French people will be cheering for him and love him a lot. Go Grigor !