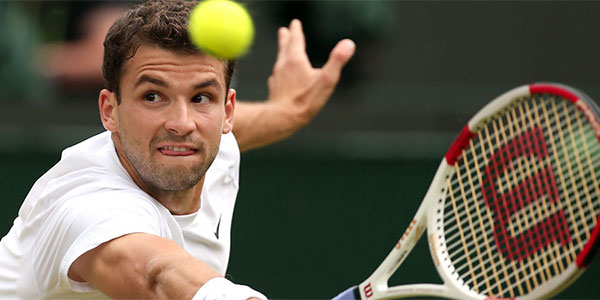 Grigor Dimitrov continues with his winning series and now is nine matches unbeaten. The young Bulgarian enters the quarter-finals of Wimbledon after beating the Argentinian Leonardo Mayer 6-4 7-6(6) 6-2. This will be Grigor's second Grand Slam quarter-final after the loss to Nadal at Australian Open earlier this year. Grigor Dimitrov needed 2 hours and 8 minutes to defeat Leonardo Mayer. The match had been interrupted because of rain when Dimitrov led 6-5 in the second set. The Bulgarian succeeded to convert 3 of 5 break-points and with 10 aces and 34 winners reached the victory.

“Luckily we were away only for 45 minutes, which wasn't enough time to cool down. I got some food and I was able to focus on what I needed to do better. I chatted to my coach," Dimitrov said. "The work that I have put in is showing now. I am looking forward to the quarter-final.”

Grigor Dimitrov earned 380 ranking points which will be enough for enter Top 10 if Kei Nishikori loses to Milos Raonic. If Dimitrov advances to the semi-finals his tenth rank will be guaranteed even if Nishikori wins.

In the quarter-finals Grigor Dimitrov will have tough opponent - the defending champion world No 5 Andy Murray. The Scotsman leads 3-1 from all previous matches against the young Bulgarian. The most recent clash was at the semifinals in Acapulco and it was Grigor Dimitrov who won.

"Now he's starting to come into his prime," said Murray of Dimitrov. "He's won a lot of matches this year. He's a tough player. Will be a hard match for me. It's a big opportunity for him, as well, playing on the Centre Court at Wimbledon for the first time. It's a great opportunity for him. Hopefully we can play a good match."

And Dimitrov said about the quarter-final match: “Oh yeah, I can go five sets with him [Murray]. It’s a great feeling to get into that kind of match. Of course, best case scenario is straight sets. But I’m not playing a mediocre player so I need to be on my best behaviour and try to put every ball back."

“He’s a cool dude. We know it’s his home here. All the crowd is behind him. I think we get along pretty good. My team and his are on pretty good terms. We always have a lot of jokes between us. One thing is off the court, other thing is on the court. That’s the best part of playing that game because you can settle everything on the court. No hard feelings after the match.”