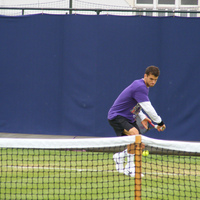 In the second round of the ATP challenger in Marburg Grigor Dimitrov defeated the Seed 1 of the tournament and current ATP rank 112 Grega Zemlja in 3 sets 3-6 6-3 7-6(0). In a match that lasted more than 2 hours Dimitrov scored 16 aces while his first service success was 64%. By reaching the quarterfinals Grigor will gain 15 ATP points in addition to the 3 from the qualifications.

The next opponent of Dimitrov will be decided from the match between Pavol Cervenak of Slovakia and Seed 8 Gaston Gaudio of Argentina, ex Roland Garros champion.