Grigor Dimitrov Entered the Main Draw in Miami. Plays Stahovsky in the 1st Round 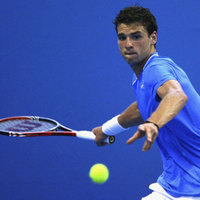 Grigor Dimitrov defeated the Olympic champion Nicolas Massu of Chile 6-2 6-3 and entered the main draw of the Miami Masters. Until 2-2 both players took their service games, then Dimitrov convincingly took the next 4 games and won the 1st set. Grigor scored 100% (12 of 12) won points of first service in the set. In the second set when the result was 2-1 Dimitrov missed 3 break-points and lost the next service game and Massu reached to lead 3-2. Then response from Grigor brilliant - he won the next games to close the set 6-3 and the match.

For passing to the 1st round of the main draw Dimitrov gained 26 ATP ranking points.

On Thursday Grigor Dimitrov will play the Ukrainian Sergiy Stakhovsky in the opening round of the main draw. The 25-years-old Stakhovsky is at No 36 in the ATP ranking with best rank being No 31. He won 4 ATP titles in his career so far: 2008 Zagreb, 2009 St Petersbourg, 2010 New Haven and den Bosch.

If Grigor is successful he would play No 32 Juan Monaco in the second round and possibly Roger Federer in the 3rd round.