Grigor Dimitrov is No 34 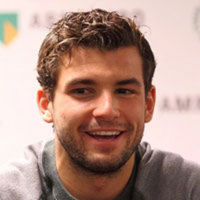 After 3 wins at ATP 500 tournament in Rotterdam, the Netherlands, Grigor Dimitrov gained 180 points which moved him 7 positions ahead to his new best position of No 34.

Grigor Dimitrov is among the players who made highest progress in Top 100. Martin Alund, Argentina, entered Top 100 to No 93, 18 positions better than his previous week's rank, after reaching the semifinals in Sao Paolo. Another Argentinian ex No 3 David Nalbandian jumps 15 positions to No 78. Simone Bolelli, Italy, is at No 67 which is 13 positions higher than last week. From the player who are higher ranked than Dimitrov two made major progress: Julien Benneteau, France, No 31 and Tommy Haas, Germany, No 18.

There are no changes in the ranking of Top 12 players. Novak Djokovic, Serbia, is No 1, ahead of Roger Federer, Swizterland, Andy Murray, Great Britain. The positions from 4 to 12 are of David Ferrer, Rafael Nadal, Tomas Berdych, Juan Martin del Portro, Jo-Wilfried Tsonga, Janko Tipsarevic, Richard Gasquet, Nicolas Almagro, Marin Cilic. Gille Simon, France, goes ahead of Milos Raonic, Canada, to No 13.

#0: Congrats Grigor! Number 34 now! Fantastic results, i am enjoying watching your steady progress since the semi final in Brisbane. Look forward to seeing you back in Australa next year. Hope it all goes good for you with Maria.