Grigor Dimitrov Lost in the Second Round in Cremona 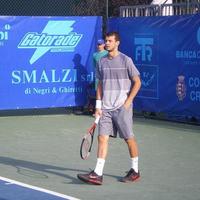 Grigor Dimitrov could not defend his points of last year as in the second round of the EUR 30K ATP Challenger in Cremona, Italy he lost to the German qualifier Matthias Bachinger 3-6 5-7. For playing in the second round Dimitrov will gain 6 ATP points but would lose 16 points from last year when he reached the quarterfinals and this way will lose positions in the ranking.

The next tournament of Grigor Dimitrov is the ATP Challenger in Nottingham, Great Britain on grass where he would start from the qualifications.