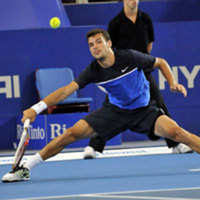 In the first tie of Bulgaria vs Czech Republic at Hopman Cup in Perth, Autralia, Grigor Dimitrov and Tsvetana Pironkova lost their single matches and won the doubles match against world No 7 Tomas Berdych and No 2 Petra Kvitova. In the first match Kvitova defeated Pironkova with a score of 6-4 6-2. Grigor Dimitrov succeeded to take a set but ultimately lost to Tomas Berdych 4-6 7-6(9) 3-6. Then in the third match the Bulgarian pair reached the success over Czech Republic 6-2 3-6 11-9.

Berdych started the match with strong services and powerful play with forehands and backhands and succeeded to break Dimitrov's game when the result was 2-1. This way the Czech took the first set 6-4. Grigor Dimitrov succeeded to break in the second set to reach a lead of 5-3 but Berdych bounced back and sent the set to tie-break. Dimitrov raced to 4-1 advantage in the tie-break but the experienced Czech won the next 3 points. The 20-years-old Bulgarian held his nerve very well and clinched the tie-break 11-9. In the third set Berdych proved too strong and took the set 6-3 and the match and sealed the win of Czech Republic in the tie.

The next tie of Bulgaria is vs Denmark represented by No 1 Caroline Wozniacki and No 236 Frederik Nielsen. The matches start at 2:30 AM CET on Wednesday. Bulgarian National TV (www.bnt.bg) live broadcasts the matches.