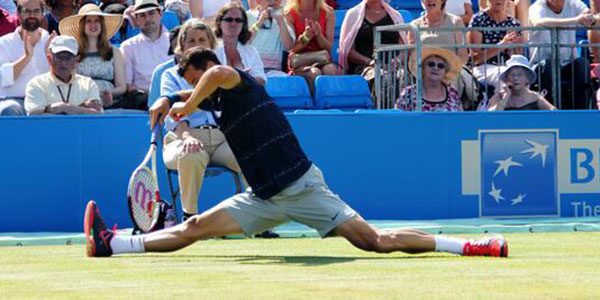 Grigor Dimitrov defeated world No 3 and seed 1 of the tournament Stan Wawrinka of Switzerland 6-2 6-4 at Aegon Championships in Queen's London to reach his first grass-court final. This will be the 5th ATp Tour final for Grigor who won the titles in Stockholm, Acapulco and Bucharest. And it is 3rd win of Grigor Dimitrov over Top 5 tennis player - he beat Novak Djokovic and David Ferrer when they were No 1 and No 3.

For participating in the final Dimitrov gained 51000 EUR of the prize money and won 150 ranking points.


The opponent of Dimitrov for the final match will be decided by the clash of Feliciano Lopez of Spain, No 29, and Radek Stepanek of the Czech Republic, No 42.

#0: So pleased for you Grigor,hope you get many more wins.