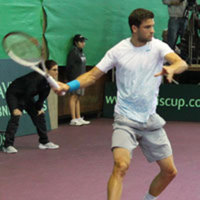 In the opening match of the tie between Bulgaria and Finland of Group II Europe-Africa of Davis Cup Grigor Dimitrov totally outplayed No 1117 Juho Paukku 6-1 6-1 6-0. This was win #13 for Dimitrov of 14 matches played for Bulgaria for Davis Cup.

In the second match of the day in Sofia Tennis Hall in Borisova Garden Alexander Lazov lost to Micke Kontinen.

The captain of the team Grigor`s father Dimitar Gospodinov will most probably change the initially announced doubles pair and ask Grigor to play on Satuday in the doubles to attempt to reach a lead.

On Sunday Dimitrov will play his second single match against Micke Kontinen, No 949.