Grigor: I came out expecting nothing less than to win 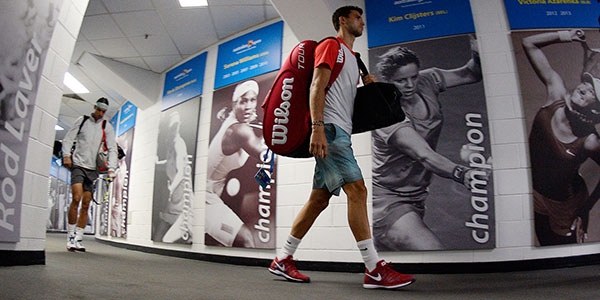 Q. Do you think you'll look back on this match as an opportunity that got away or a step forward in your progression?

GRIGOR DIMITROV: Well, there's a lot of mixed feelings right now. I'm a bit shattered. It's tough losing that match, my first quarterfinal. I came out expecting nothing less than to win.

All the credit to Rafa. He's been a tremendous competitor, great guy off the court. We had a great battles the past year and now again, and hopefully in the future more.

The one thing I'm really excited is to actually get back on the court in the upcoming weeks and start working and come up to the same stage and try to do it again.

Of course I'm deeply disappointed. I mean, I'm not going to lie. But, you know, in the end of the day I have to take the positives and the negatives out of the match and just kind of move on.

Happy with the situation at the moment. Again, all the credit to Rafa. I think he played a great match. Also his physicality came over towards the end of the match. He's not one of the best, I think he's the best player right now.

Hopefully we're going to have more battles in the future together.

Q. You exchanged some words at the net with him. What did he say to you?

GRIGOR DIMITROV: I mean, I don't want to say what he told me. The one thing is we have tons of respect for each other, again, on and off the court. You know, he just wished me luck and, of course, all those things.

In the end of the day I know I'm going to play him again. We have a lot of jokes here and there with him, but that's great. Of course, congrats to him and I think the team. That's just how it goes in the slams, in matches like this.

Q. What have these two weeks done for your confidence and belief going forward?

GRIGOR DIMITROV: Confidence, yeah, obviously always going to be there in a way. It's one thing you've worked so hard and you kind of get rewarded a little bit, you know, coming to that first quarterfinal to me was, of course, big.

But I had expectations for myself. That wasn't just to go out there and play. So, you know, that's to me the biggest disappointment, the negative part of it, of course.

But in the end of the day, you know, I want to get to that position again, quarters, semis, final, whatever it is, any big tournament. That's my goal. That's why I'm actually excited to get on court in the upcoming weeks.

You know, I can take a lot of things, but at the moment I'm just a bit all over the place, yeah.

GRIGOR DIMITROV: Not easy. Not easy. I felt that he actually stepped up his game a little bit more. Again, his physicality came in even more. He held his ground better in the fourth set.

Even though I felt I had gaps here and there, he was never letting me take a charge of the point or any of his service games. He actually served really good in the fourth. We both struggled a little bit here and there occasionally, but that's in the game.

But I'm excited. I'm excited. I think in a way the fourth set could have gone either way. Depends of the start. But, you know, the outcome wasn't very positive for me.

Q. Rafa said after the match that you have all the qualities to become a great champion. Do words like that mean something to you?

GRIGOR DIMITROV: It's nice to hear. It's nice to hear, you know. I'm flattered. But till it actually happens, even if you say it, it doesn't justify the presence [sic]. We know each other, me and him.

Again, tons of respect for each other. I appreciate what he said, of course. But I think I still have a long way to go out there and I need to improve. I need to improve every day. I felt that, you know, those two weeks, even though I haven't played my best tennis throughout the whole weeks, I still felt I've improved.
Actually the work that I've done in the past months, it actually comes in. To me, at that stage, at that point, that's the most important thing. It's good to refresh a little bit and get back.

Q. You mentioned his physicality in the fourth set. Do you see that's an area of your game you still need to improve?

GRIGOR DIMITROV: I think in a way. I think every player, if you just look around, you know, you need your legs. That's basically just what it is nowadays. The game has become so physical throughout all the years. You know only the strong guys are surviving.

You see up in the last eight out here, I mean, all those guys are Grand Slam champions. They're experienced guys. They're strong guys. Of course, everything has to, of course, build up and take its toll until you actually reach that stage.

But of course, I mean, I have areas. I know I have areas that I can definitely improve even more. I think it's just what I have right now is still work in progress. When I come out on the court or in the gym every day, I don't work for the day after. I look in the future.

At the end of the day, tennis is not a sprint. It's a marathon sport. You play five sets here, best of five. You know, it's always nice to see where you're at, especially in events like that.

Q. If you had that forehand again on the set point...

GRIGOR DIMITROV: Go out there now.

Q. Sorry. Would you go the same way? Were you worried about his forehand?

GRIGOR DIMITROV: Which one?

#0: Congratulations! It was a very tough match. Nadal is one of the most difficult to play against. He tries to put you in long rallies and have these sharp angel shots. Was great performance and pleasure to watch!
I guess the main difference was his experience.