Grigor Dimitrov reached eighth career final on ATP World Tour level and second final of the year after beating third seed Ivo Carlovic of Croatia 7-6(0) 7-6(2). Both sets were decided in tie-breaks where Dimitrov showed his class.

On Sunday at 5pm Istanbul and Sofia time (4pm CET) Grigor Dimitrov will play Diego Schwartzman of Argentina in an attempt to win his 5th ATP Tour trophy.... 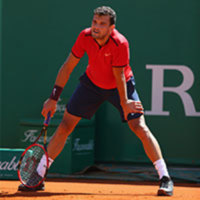 Grigor Dimitrov left the Masters in Monte Carlo after losing to Gilles Simon of France 4-6 3-6. After this lost Grigor will slide down in the ranking with at least 2 positions.

The next tournament where Grigor will play is the ATP 250 Istanbul Open in Turkey. Then Dimitrov will play at the two masters in Madrid and Rome....

Grigor Dimitrov started with a convincing win over the Serbian Filip Krajinovic at Monte Carlo Masters. The Bulgarian needed one hour and 17 minutes to take the match 6-3 6-2.

In the second round Dimitrov will play No 18 Gilles Simon of France. Simon won four of the five matches against Dimitrov but the last clash was won by the Bulgarian in Brisbane at the start of the new season. 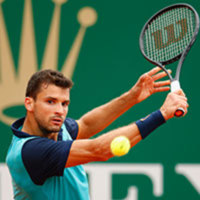 On Monday Grigor Dimitrov starts the clay season at Monte-Carlo Rolex Masters against the Serbian Filip Krajinovic, world No 107. Krajinovic entered the main draw after beating Santiago Hiraldo of Colombia in the qualifications. Dimitrov scored two wins of two matches against Filip Krajinovic, in Acapulco and Stockholm in 2015.

The possible second round opponents of Grigor Dimitrov are 15th see...