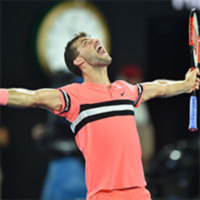 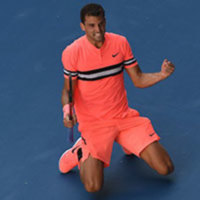 Third seed Grigor Dimitrov advanced to the last 16 of the Australian Open on Friday with a four set win over the young Russian Andrey Rublev. The Bulgarian beat the 30th seed 6-3 4-6 6-4 6-4 in three hours on Rod Laver Arena as temperatures reached 40°C.

Dimitrov made 15 double faults and 61 unforced errors with 26 errors from his otherwise strong backhand side.

“These are the most important... 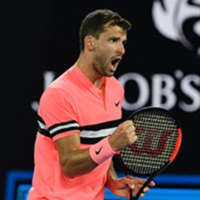 World number 3 Grigor Dimitrov was pushed to the limit before scraping past 186th ranked Mackenzie McDonald of the United States who entered the main draw from the qualifications.

"He deserves a lot of credit. He played an unbelie...

Grigor Dimitrov made a strong start to his mission of Australian Open 2018 with 6-3 6-2 6-1 win over the qualifier Dennis Novak of Austria. Dimitrov needed only 1 hour and 38 to close the match.

"I just tried to be compact, focused, used every opportunity I had and tried to save some energy," said the semi-finalist of last year's edition of the tournament.

In the second round on Wednesday Gr... 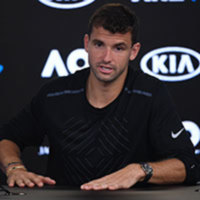 Seed 3 of the main draw Grigor Dimitrov will start again st the qualifier Dennis Novak of Austria in the first round of the first Grand Slam tournament of the year. The match of Dimitrov and Novak is 3rd in a row at Rod Laver Arena on Monday following Ostapenko - Schiavone and Venus Williams - Bencic. The first match starts 1am CET/2am Sofia time.

The potential second round opponent of Dimitrov... 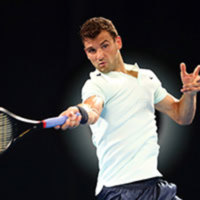 World No 3 Grigor Dimitrov saved two match points in the tie-break of the second set on his way to the win over the Australian John Millman 4-6 7-6(8) 6-3. Dimitrov complimented the play of Millman:“He couldn't have played the ball better,” said Dimitrov. “But also, at the same time, I thought I couldn't have done anything else besides what I did. I think two of the shots in the first match point ... 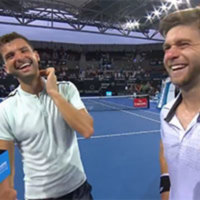 Grigor Dimitrov with partner Ryan Harrison beat the Australian pair Lleyton Hewitt and Jordan Thompson 6-3 1-6 [10-5] in the first round of the doubles at Brisbane International.

In the quarterfinals Dimitrov and Harrison will play 4th seeded Australians Nick Kyrgios and Matt Reid. The match is scheduled for Wednesday, 3rd January.

The first single match of Dimitrov will be on Thursday, 4th ...