Smashing Win for Grigor Dimitrov. Bulgaria Advances to Next Round of Davis Cup 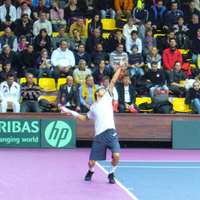 Grigor Dimitrov continued his steady participation at Davis Cups matches. On Sunday in the first single match of the day of the tie between Bulgaria and Monaco of the Group II of Europe/Africa Grigor Dimitrov defeated the best ranked player of Monaco Benjamin Balleret in 3 sets 6-3 6-3 6-1. This way the Bulgarian team won the tie by leading 3-1. Later Tzvetan Mihov lost to Thomas Oger and the final result became 3-2. In July 2010 Bulgaria will meet the strong team of Slovenia.