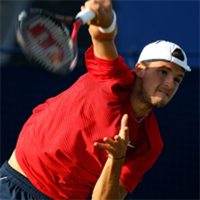 Grigor Dimitrov left the singles tournament of grass tournament in Eastbourne, Great Britain, after losing in the quarterfinal to Janko Tipsarevic. The 26-years-old Serbian won the match in 2 sets 6-3 7-6(2). Grigor let Tipsarevic to break in the first game of the match. In the second game Dimitrov missed to chances to break in his turn. Tipsarevic reached a lead of 5-3 and after the 5th double fault of Grigor the first set was closed with a score of 6-3. In the second set Dimitrov was losing 0-3 but succeeded to recover to 3-3. When leading 4-3 Tpisarevic reached to break-point and won it and was to serve to win the match. Dimitrov succeeded to break in his turn. Dimitrov had the chance to take the second game when leading 6-5 but this time Tipsarevic broke and tie-break had to decide the set. Grigor took only 2 points and the match winner became Janko Tipsarevic. Dimitrov won 45 ATP ranking points which will move him to a new best rank of 61 or 62.

Almost immediately after the singles match Grigor Dimitrov with his partner Andreas Seppi played and won the semifinal in the doubles against the Brits Colin Fliming and Ross Hutchins with a score of 7-5 7-6(5). This way Grigor Dimitrov became the first ever Bulgarian finalist in ATP doubles tournament. The final match is on Friday against the doubles specialists the Israeli pair Jonathan Erlich and Andy Ram.

#0: What happened to the doubles final?