114 is the New Best Rank of Grigor Dimitrov 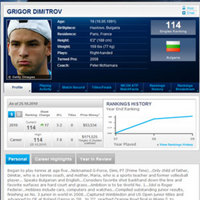 Expectedly after reaching the final of the ATP Challenger in Orléans Grigor Dimitrov moved 17 position ahead and occupied No 114 at this week's ATP Ranking which is his best ever position. Only at age of 19 Dimitrov became the second best ranked Bulgarian ever. Until now this was Milen Velev who reached up to No 121. The best ever ranked Bulgarian tennis player is Orlin Stanoychev who was No 96.

Tihomir Grozdanov moved ahead of Dimitar Kutrovsky as the second best player in today's ranking of the Bulgarian players, ranked respectively 578 and 618. Todor Enev is 4th at 774, Boris Nicola Bakalov - 860, Valentin Dimov - 886.

The only change in Top 10 is the swap of 9th and 10th positions - Andy Roddick (USA) goes ahead of Mihail Yuzhny (Russia). Rafael Nadal (Spain) is No 1 ahead of Roger Federer (Swizterland) and Novak Djokovic (Serbia).