184 is the New Rank of Grigor Dimitrov 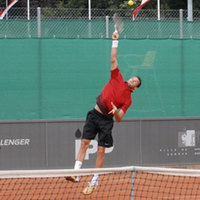 Grigor Dimitrov marks a jump of 61 positions ahead to go to his best ever ranking of 184 thanks to the points gained from the title of the Geneva Challenger and the points from the Futures in Padova. In the all-time ranking of Bulgarian male tennis players Dimitrov improves the 3rd place of Ivaylo Traykov who were 211. First is Orlin Stanoychev who is best all-time ranked Bulgarian player who reached No 96, second is Milen Velev - No 121.

In this week's ranking Dimitar Kutrovsky at No 580 is the second best ranked Bulgarian. Thomir Grozdanov is at 583. Todor Enev moves 36 positions ahead to 682.


Just before the start of the main draw matches of US Open there are no changes in Top 10. Rafael Nadal of Spain is No 1 ahead of Roger Federer of Switzerland and Novak Djokovic of Serbia.

* Notice the style of play of all those top dominant tennis players. Grigor has much similar technique and fluidity. The “Gift” is there. Now he needs the courage and the will…