280 Is This Week's Ranking of Dimitrov 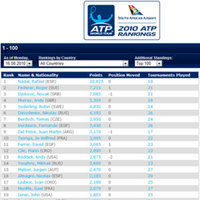 In the ATP Ranking published on 16 August 2010 Grigor Dimitrov goes to position 280 in the singles and 363 - in the doubles. The points from the title in Irun, Spain will be added to Grigor's balance next week.

The next best Bulgarian player Dimitar Kutrovsky keeps his position of 586. 3rd is Tihomir Grozdanov - at 600, followed by Todor Enev - 724, Valentin Dimov - 801, Tzvetan Mihov - 953. The rest of the Bulgarians are after position 1000 in the rankings.

Rafael Nadal (Spain) leads the ranking while Roger Federer (Switzerland) goes as No 2 ahead of Novak Djokovic (Serbia) who goes to No 3. There are no changes in the positions from 4th to 7th - 4. Andy Murray (GreatBritain), 5. Robin Soderling (Sweden), 6. Nikolay Davydenko (Russia), 7. Tomas Berdych (Czech Republich). The Spaniard Fernando Verdasco goes to 8th ahead of the Argentinian Juan Martin del Potro. The Top 10 is closed by Jo-Wilfried Tsonga of France.