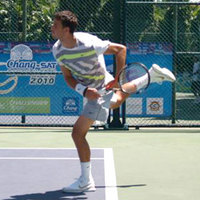 Grigor Dimitrov was triumphant in Bangkok with 2 titles in the past two weeks. In the final of the Bangkok 2 35'000 USD ATP Challenger today Grigor Dimitrov defeated the Russian Alexandre Kudryavtsev of Russia in straight sets 6-4 6-1 to add 9th single tournament title to his balance. This is the 3rd Challenger title of Grigor after the titles in Geneva and Bangkok (Week 1). Dimitrov sticks to his tradition to ultimately win the title if he reaches the final. He won 80 ranking points for the title and his new balance would move him to his new best ranking of about 135.

Grigor Dimitrov will not participate at the ATP 250 Thailand Open. The next tournaments where Dimitrov would play are in Europe - the Challengers in Mons, Belgium and Rennes, France.

#1: congatulations Grigor! Mons is a good choice, there are few top 100 experienced players like Malisse or Clément. A good place to reach a new step in your young career!