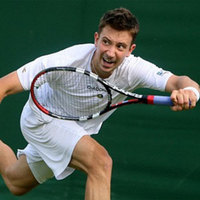 The Brit Alex Bogdanovic who came from the qualifications will play Grigor Dimitrov in the first round of theprestigioustournament on grass in London on Monday. The match is forth in a row on Central court the first match starting on 12:30 local time and most probably will be casted by Eurosport International or Eurosport 2. 26-years-old Bogdanovic has a current ATP rank of 160. Dimitrov met Bogdanovic once last year at the challenger in Nottingham and won4-6 7-5 7-6(5). Last month Grigor Dimitrov and Alex Bogdanovic partnered in the doubles at Israel Open inRamat HaSharon and won in the first round but lost in the quarterfinals.