Another Final for Grigor After Second Victory vs Soeda 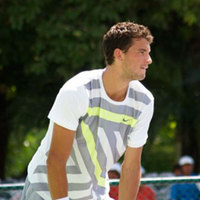 Grigor Dimitrov reached the final of the second consecutive week ATP Challenger in Bangkok, Thailand. Grigor Dimitrov defeated in straight sets Seed 4 Go Soeda of Japan 6-3 6-4. Last week's path of Grigor to the final was again after winning Soeda in the semis. Now Dimitrov's won matches balance is 14 of last 14. The points won so far in the tournament - 48 will move the Bulgarian player several positions ahead in the ATP ranking.

#0: Well done again! 14th consecutive victory! It's very important to obtain back to back victories against players like Soeda, with a higher ranking.
Focus in winning this tournament. Your opponent has won favourites like Russell or Gremelmyer. This 80 points would put you probably above 125 in the ATP ranking, very close to the Top-100 objective.
You can do it! Come on, Grigor!