Convincing Win for Grigor Dimitrov at the Start in Geneva 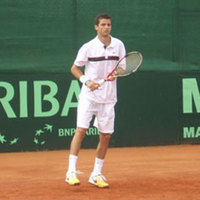 Grigor Dimitrov won his first round match of the main draw against the German Cedrik-Marcel Stebe 6-3 6-3 within less than an hour at the 30'000 ATP Challenger in Geneva. Dimitrov scored 9 aces while Stebe had no aces. Grigor gained 6 ranking points for reaching the second round. His opponent will be decided on Tuesday in the match between Yuri Schukin (Kazakhstan, ATP Rank 129) and Pavol Chervenak (Slovakia, ATP Rank 270).