Dimitrov Advanced to the Second Round in Bangkok 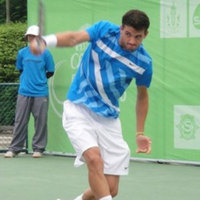 Grigor Dimitrov advanced to the second round of the 35'000 USD ATP Challenger in Bangkok. Ivan Dodig of Croatia retired after injury when the result was4-6 6-2 1-0. Grigor gained 6 ATP ranking points. This was 11th consecutive match win for Dimitrov.

In the second round the young Bulgarian will play Matthew Edbden of Australia, current ATP rank 164.

nothing can stop you now my friend.. I can't wait to see you against his majesty Federer. Your game is so similar to his that it would be like watching Federer playing against himself.. isn't that gonna be something

#0: Come on, Grigor! Congrats again! Maybe it's not the way you wanted to win, but that's sport and injuries are part of the game.
Continue your climbing to the Top-100, I'm sure you can make it before the end of the season!