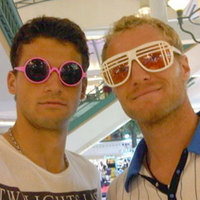 For second time in his career Grigor Dimitrov won over player who was in Top 20 of ATP ranking. After the win vs Tomas Berdych in 2009 in Rotterdam today in the quarterfinal match of the ATP Challenger in Bangkok he defeated Dmitry Tursunov of Russia 7-6 6-3 (Photo: Another funny picture of Dimitrov and Tursunov). Dimitrov will add 29 ranking points to his balance which would help him to move with more than 20 positions to a new best ever ranking.

In the semifinal match Dimitrov will play Seed 2 of the main draw Go Soeda of Japan, ATP rank 110.

#0: Well done, Grigor! Congratulations! Remarkable victory. You have to go all the way and win this tournament, although Soeda is probably one of the toughest players in the draw.
Come on Grigor!