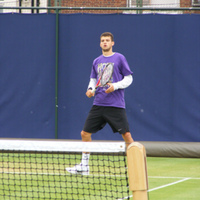 Grigor Dimitrov continues his successful series in the qualifications of the ATP Challenger in Marburg, Germany, In the third round he defeated Seed 7 of the qualifications the Russian IlyaBelyaevwith a result of 7-6(4) 6-2 and this way entered the main draw of the tournament. The first round opponent of the Bulgarian player will be defined later on Monday when all the qualification matches are over. So far Grigor gained 3 ATP ranking points.