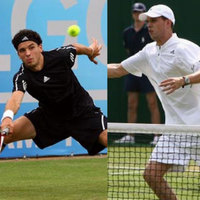 Although Grigor Dimitrov lost in the first round of the qualifications of the singles tournaments of the 42'500 EUR Challenger in Nottingham, Great Britain, on grass, he signed up for the doubles with the British mainly doubles player Jonathan Marray. Because of rain the first round matches of the doubles were played only on Thursday and Dimitrov/Marray defeated Ilija Bozoljac (Serbia) / Gilles Muller (Luxembourg) 6-4 7-6(3). On Friday the Bulgarian/British pair will play the wild card holders the Brits Chris Eaton and Dominic Inglot.