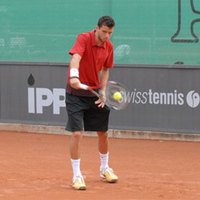 For the first time in his career Grigor Dimitrov reached final of ATP Challenger tournament after winning the semifinal in Geneva against David Goffin of Belgium 6-3 7-5. This was the 3rd win of Grigor vs David Goffin within the last 2 months. Earlier today Grigor Dimitrov played and won the quarterfinal match vs the Frenchman Laurent Rochette. For reaching the final Grigor gained 48 points and would move ahead to around No 210.

In the final on Sunday Dimitrov will play Seed 3 Pablo Andujar of Spain, ATP Rank 118. The 24-years-old Andujar's best ever ranking is 81 in March 2009. The Spaniard won 5 challenger tournament title in his career and reached the second round of Roland Garros after passing the qualifications.