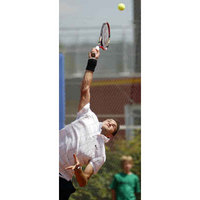 For the first time his carrier Grigor Dimitrov reached the semifinals of challenger tournament. In the quarterfinals of the 30'000 EUR challenger in Marburg, Germany, Dimitrov defeated the Slovak Pavol Cervenak in 2 sets 6-3 7-6(3). For reaching this phase of the tournament Grigor will gain 29 ATP points and will get close to Top 300 when the ranking would be announced on 5 July.

In the semifinal on Saturday Grigor Dimitrov will play Simone Vagnozii of Italy, current ATP rank 207. The match is at central court at 3 pm CET after the otherall-Czechsemi-final between Ivo Minar and Jaroslav Pospisil.