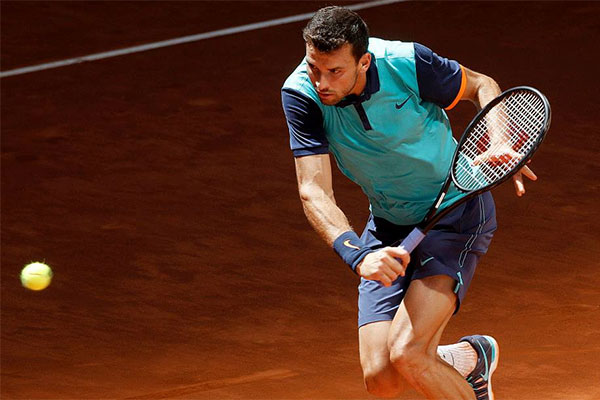 Grigor Dimitrov edged Stan Wawrinka in the third round of Madrid Masters 7-6(5) 3-6 6-3. Dimitrov saved 10 of 12 break points that he faced and scored 17th match win for the season. Less than a month ago Dimitrov ousted Wawrinka in Monte-Carlo 6-1 6-2. So now Grigor leads Stan Wawrinka 3-2 in their Head-2-Head series.

"It was a tough match," said Dimitrov. "He was up a break in the first set and he was playing good tennis, much, much better than when we played in Monte-Carlo. Today, what I think I did really well was to keep a good composure throughout the whole match. I was playing solid tennis, even though, occasionally, he was just outplaying me and over-powering me.

“I exploited his weak spot, which was his forehand, and he missed a couple of times, which gave me the confidence. After breaking in the third set, I felt really comfortable to step in and win the match and I think that's the best thing I did today."

"Everything worries me about Dimitrov," said Nadal. "He's a very good player. The only way to beat him is to play at really high level. I think he has had more difficult matches than me this week. That's an advantage for him. Let's see what happens. I hope to be ready for it, but I know Dimitrov is a fantastic player and a player that can win against everybody. Great talent."

Grigor Dimitrov with his partner Jurgen Melzer lost to Matkowski/Zimonjic in the second round of the doubles tournments.

Dimitrov-Nadal match is at 3:30pm on Friday on Manolo Santana Court.