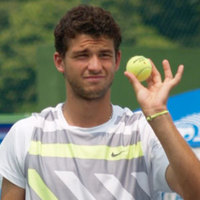 After the second title in Bangkok last week Grigor Dimitrov moved 10 places up in the ATP ranking to reach his new best ever position of 136. Grigor added 80 ranking points for the Bangkok 2 Challenger title and 8 points were removed from last years. His current balance is 414 points equal to the 135th ranked Ramon Delgado of Paraguay. His current doubles ranking is 560.

The second best Bulgarian in the list Dimitar Kutrovsky also moves 10 positions ahead to No 570. Tihomir Grozdanov is at 581, Todor Enev - 762, Valentin Dimov - 854.

The Top 10 has no changes - Rafael Nadal of Spain is No 1, followed by Novak Djokovoic (Serbia), Roger Federer (Switzerland).

#2: About jea395's comment. I was thinking the same thing. How come Grigor didnt play that tournament?????? i guess he wanted to rest. i dont know. btw.. does grigor ever answer any questions here? i guess he does not have time

#0: Well done, Grigor! Top 100 is very close. Keep focused and no doubt you'll make it before the end of the season.

Can anyone explain to me why Grigor didn't play ATP 250 in Bangkok? Was it a personal choice? I just cannot believe that one of the 3 WC of the tournament goes to Marc López, ranked #729 in ATP. Is it just because Marc is a close friend to Rafa? I think Grigor should have obtained a WC for this tournament being in Bangkok, but I don't know if Grigor asked for it or just refused to play.