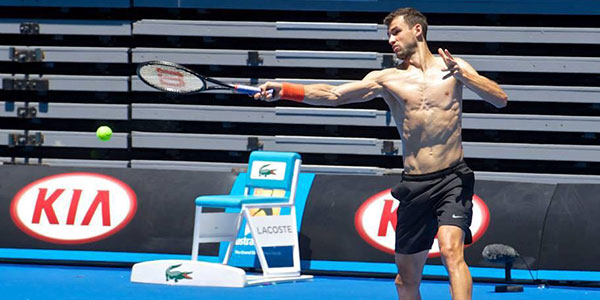 Grigor Dimitrov starts on Monday early morning against world No 90 the German Dustin Brown in Melbourne. The match is scheduled for 1 am CET on Court 2. Dimitrov won the only match against Dustin Brown - in the second round in Gstaad back in 2012. The potential second round of Dimitrov will be decided in the match of Lukas Lacko, No 99, and Maximo Gonzalez, No 98.

Dimitrov is 10th seeded and the first seeded player he would meet is David Goffin, No 22, Belgium in the third round. In the 4th round we could watch a match Grigor Dimitrov - Andy Murray.

Last year Dimitrov lost in the quarterfinals of Australian Open to Rafael Nadal 6-3 6-7(3) 6-7(7) 2-6 after beating Milos Raonic in the third and Roberto Bautista-Agut in the fourth round. In the 2013 edition of the tournament Dimitrov left with after the first round loss to Julien Benneteau. In 2012 the Bulgarian defeated Jeremy Chardy at the start but then lost to Nicolas Almagro. Back in 2011 Dimitrov entered the main draw after 3 wins in the qualifications and then beat Andrey Golubev in the first round and lost in the second round to Stan Wawrinka. In his first Australian Open participation in 2010 Dimitrov was stopped in the first round of the qualifications by Robert Kendrick.

The matches of Australian Open will be broadcasted by Eurosport.