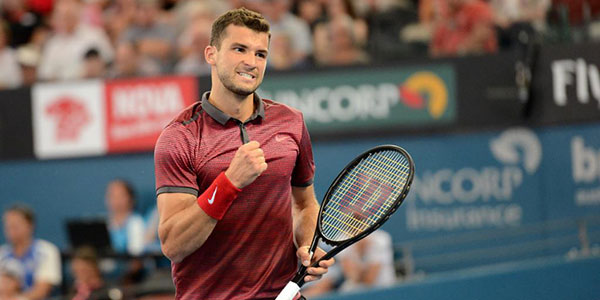 Fourth seed Grigor Dimitrov needed 2 hours and 30 minutes to win his first single match of the new season. In the second round at Brisbane International he scored 10 aces, saved 5 of 7 break-points and after saving 2 match points succeed to defeat the Frenchman Jeremy Chardy 3-6 6-4 7-6(8). In the tie-break of the 3rd set reached a lead of 4-2 then Chardy took the next 4 points to 4-6. Then the Frenchman made two double faults which brought Dimitrov back to the match. Grigor had chances to close the match at 7-6 and 8-7 but succeeded only with the 3rd chance and won the tie-break 10-8 and the match.

Dimitrov gained $12'990 and 45 ranking points after this win. In the quarterfinals on Friday Grigor Dimitrov will play the Slovak Martin Klizan, No 34. It will will be the first match of Dimitrov against Klizan.

On Thursday Dimitrov and his doubles partner Thanasi Kokkinakis of Australia will play in the quarterfinals against seeded third pair Robert Linstedt of Sweden and Marcin Matkowski of Poland. In the first round Dimitrov/Kokkinakis defeated Chardy/Kubot 6-3 3-6 [10-8].