Grigor Lost to Berankis at IPP Open in Helsinki 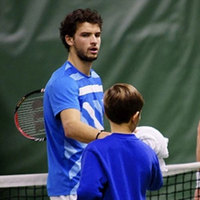 In the semifinal match of the ATP Challenger in Helsinki, Finland, Grigor Dimitrov lost in three sets to Richard Berankis, Lithuanian tennis hope. With a score of 6-7(5) 6-0 1-6 Grigor Dimitrov ends the tennis year 2010. The expected ATP ranking of the Bulgarian is 106 when announced next Monday. Dimitrov keeps very good chances to enter directly the main draw of Australian Open in January 2011.

The first tournament of the new 2011 year for Dimitrov would be Aircel Chennai Open, 450'000 USD, in India from 3 - 9 January. Grigor would start in the main draw in the company of Tomas Berdych, Marin Cilic, Richard Gasquet and other Top 100 players.