Grigor Passes to Second Round of the Qualifications in Germany 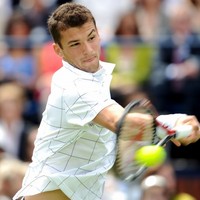 Grigor Dimitrov defeated in straight sets 7-5 6-0 the representative of Argentina in the first round of the qualifications of the ATP challenger in Braunschweig.

The second round match opponent of Grigor Dimitrov is Seed 3 Gabriel Trujillo-Soler of Spain, ATP rank 279. The match will be played later on Sunday.