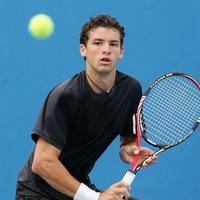 Grigor Dimitrov had no problems and defeated the wild card entry Sebastian Rieschick of Germany in straight sets 6-3 6-2 in the first round of the main draw of the 30K EUR challenger in the German province of Hesse. With this win Dimitrov added 6 ATP ranking points to the 3 from the qualifications.

The opponent of Dimitrov in the second round is the Slovenian Grega Zemlja, Seed 1 of the tournament and current ATP rank 112. The match is on 12:00 noon local time on Wednesday. One month ago at Roland Garros Grega Zemlja passed the qualification rounds, won in the first round against the No 25 Juan Monaco and lost in the second round to Gabashvili.